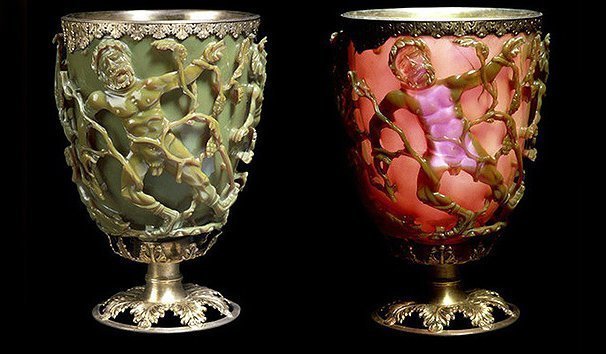 Posted at 17:55h in 3D Printing in Research by Francesco

The Lycurgus Cup is an ancient glass artefact from the Roman period (around the 4th century), known to be the only intact glass object made during this time to show dichroic properties.

The phenomenon has remained unexplained for centuries; but today, we know that the dichroic effect is due to the presence of gold and silver nanoparticles in the glass (about 70 nanometers, less than a thousandth of a grain of salt – they are visible only with an electron microscope). When viewed in reflected light the Cup appears green, since the metal particles are large enough to reflect the light without eliminating its transmission; if the light is transmitted, however, the blue light is dispersed more effectively and the red color prevails. Probably the glassmakers of the Roman era, although very skilled, were unable to master the use of dichroic glass, and it is likely that the effect was obtained by mere chance. 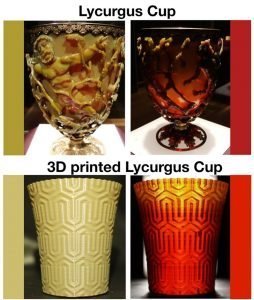 Recently Wageningen University and Research has promoted a research with the aim to create a 3D printing filament with the same properties of the dichroich glass. The project originated from the curiosity to understand if modern 3D printing technology had the means to recreate an artifact of more than 1600 years ago, with all its characteristics.

To do so, the scientists created a special filament (3 mm) containing a nanocomposite of gold and silver, which was then used with a normal FDM 3D printer.

To extrude the filament, the scientists used our Felfil Evo. Thanks to its small size, Felfil Evo is the perfect extruder for research purposes, as it allows to test limited quantities of material and have immediate feedback.

The experiment was successful, although the colors of the 3D printed cup are slightly different from those of the original Lycurgus Cup.

If you need more information on Felfil Evo and the materials it supports, please contact us!

Want to know more about what Felfil Evo can do?