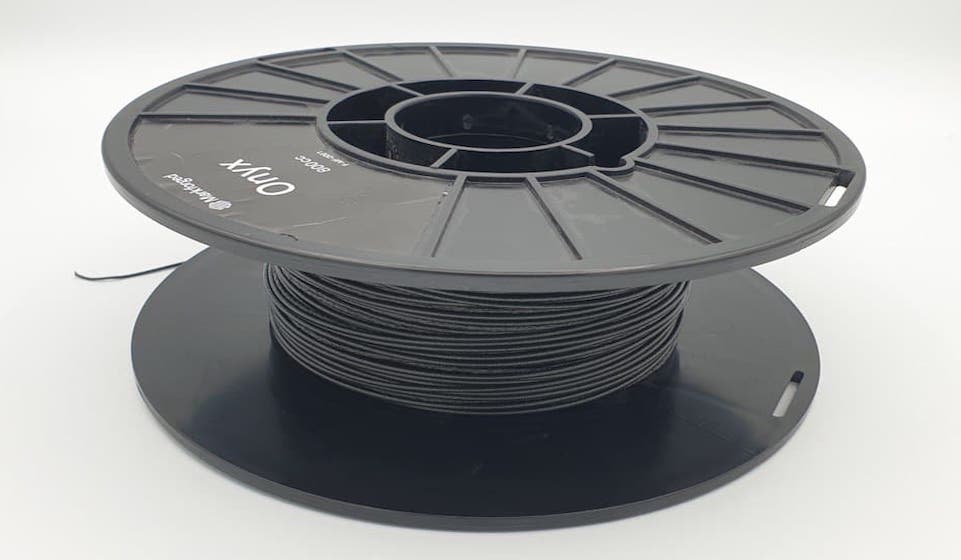 16 Nov ONYX Filament: how recycle it with Felfil system

Posted at 13:33h in 3D Printing in Research, Tech Corner by erica

We successfully recycled Onyx filament by Markforged with our complete recycling system!

The Onyx filament by Markforged is a high-end compound filament made out of PA12 and short carbon fiber.

At a first look it appears as a black smooth filament. Markforged produces It only in 1,75mm diameter suitable for its professional 3D printers, but many manufacturers produce similar filament also in 2,85mm.

Onyx is a high strength compound and it is characterized by its flexibility. These two aspects make Onyx harder to shred than standard materials. But not enough to be a real trouble for Felfil Shredder. 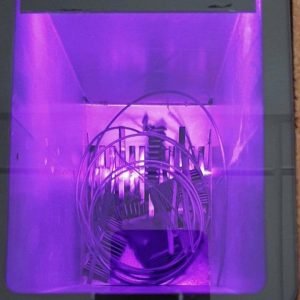 We received by a customer several parts that need to be shredded. They were mainly print supports and prototype parts that already finished their evaluation process.

The shredding process takes more time than usual; this was due mainly by the Onyx’s flexibility. If with standard PLA Felfil Shredder is able to shred about 2Kg/hours with Onyx the time is doubled. An aspect that needs to be considered is that you will need to shred it at least two times to get a consistent output, but the second run takes a very short time about 10min for a kilogram. 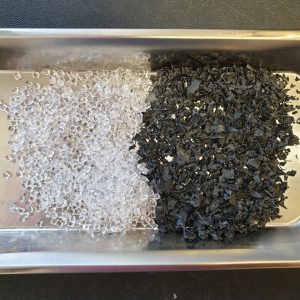 Once shredded the polymer needs to be dried to avoid moisture during the extrusion process. This step is crucial and if not proper did the moisture will afflict the output resulting in a not smoot surface filament with inconsistent diameter. We did several drying tests and found that the best result was at 110°C for about 6hours in a laboratory drying hoven.

If the firsts steps were made correctly the extrusion will be probably the easiest part of the whole process. As we previously said the more important things to keep under control is the consistency of the input and the lack of moisture into the chopped pieces. Inconsistent input will result in a not steady screw feeding that will afflict the extrusion flow.

The extrusion temperature was set to 270°C, so you will need a 300°C upgraded Felfil Evo to do this job.

The screw speed was set to 7Rpm in order to avoid jams in the feeding zone.

The fibers present in the compound help to keep the diameter consistent so the extrusion process was quite easy.

Since it is a stable material during the extrusion Felfil Spooler can be set in Soft mode, it will keep the filament output nice and consistent easily. We set the goal diameter to 1,69mm since we know Markforged printers are sensitive regarding too with filament.

The only crucial thing to keep in mind is that: since Onyx needs to be extruded at relatively high temperature it needs more distance between the fan array and the measurement system than usual. This is important in order to cooldown the filament properly before the measuring and pulling phase. If the filament comes too hot to the puller the result will be a “linguine” like filament instead of a perfectly round filament.

Recycling the Onyx is a quite easy process, you will only need to pay attention to a couple of aspects in order to obtain a good result.

The entire process makes a lot of sense mainly due to the high cost of this material since a 800cc spool of Onyx costs about 190,00$ plus VAT plus shipping, lowering the ROI of purchasing a Felfil Recycling System to just 10kg of recycled material.

Want to know more about it?