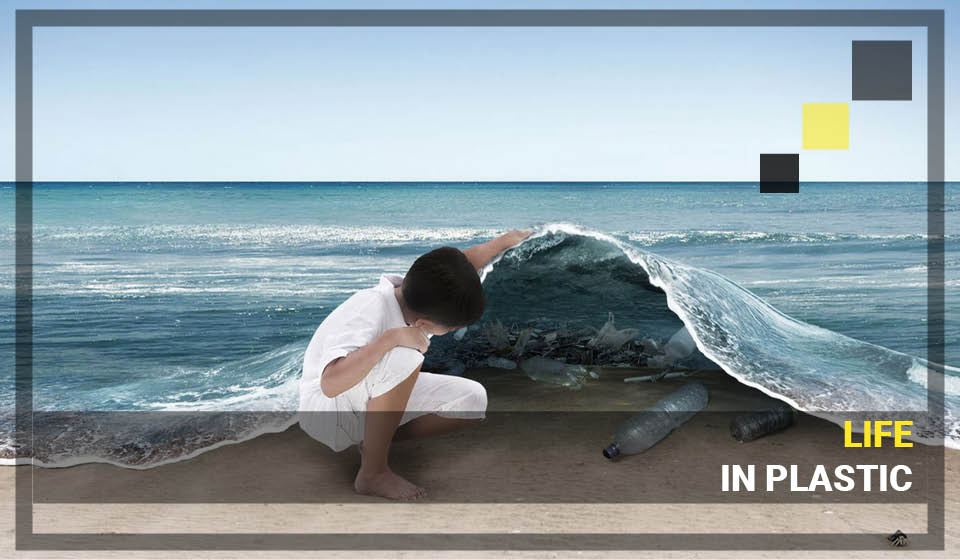 11 Jun The Plastic island: pollution facts and some of the best recycling projects

If ocean pollution increases at current rates in the next years, experts estimate that by 2025 the ocean is expected to contain 1 tonne of plastic for every 3 tonnes of fish by 2025, and by 2050, more plastics than fish (by weight).

How much plastic is in the sea?

Just a quick look is enough to understand that plastic pollution facts are scary: most recent report by World Economic Forum points out that each year at least 8 million tonnes of plastics leak into the ocean (it is almost the same as dumping the contents of one garbage truck into the ocean every minute), and that today the total weight of plastic debris in the oceans might be over 150 million tonnes, even though it is almost impossible to have an accurate estimation.

The Pacific plastic island: the environment is in danger

The great plastic garbage patch which formed in the Pacific Ocean, close to the North Pacific Subtropical Gyre, has become, in the collective imagination, the symbol of oceans pollution: it is the largest open air dump in the world (but not the only of this kind: in the Mediterranean Sea another one is growing), and its size is estimated to be around 1.6 million km2, almost five times the size of Italy.

The island originated from the accumulation of plastics and other debris that have been trapped by the currents of the North Pacific Gyre; once these plastics enter the gyre, they are unlikely to leave the area until they degrade into smaller microplastics under the effects of sun, waves and marine life. The biggest part of the plastic island is composed of these microplastics, not visible to the naked eye but dangerous for the oceanic ecosystem and for humans: plastic ends up in the stomachs of marine animals and, step by step, in the food chain. The last destination is, probably, our dinners.

There also bigger wastes, which animals eat thinking they are food, with dramatic consequences.

Felfil, Parley, Adidas and the importance of recycling plastic

It is clear that this situation is no longer sustainable, and that we are required to make reflections. The report points also out the ever-growing importance of a reduced and reusable packaging for every product; the cornerstone, anyway, will be our ability to recycle, in order to transform plastic wastes into a precious resource.

Many brands already decided to link their corporate image to sustainability and attention to the environment. Just to name some of the most interesting projects, Adidas is working together with Parley to manufacture sportswear (from running shoes to swimsuits) starting from plastic wastes; Norton Point is producing sustainable sunglasses using plastic debris picked from the oceans; Lush cooperates with The Ocean Legacy Foundation to create ecological packages.

In this sense Felfil Evo is an innovative and sustainable product since it allows the user to create new plastic filament for 3D printing using just plastic garbage or materials from previous wrong prints, contributing, in this way, to reducing the wastes and safeguarding the environment.